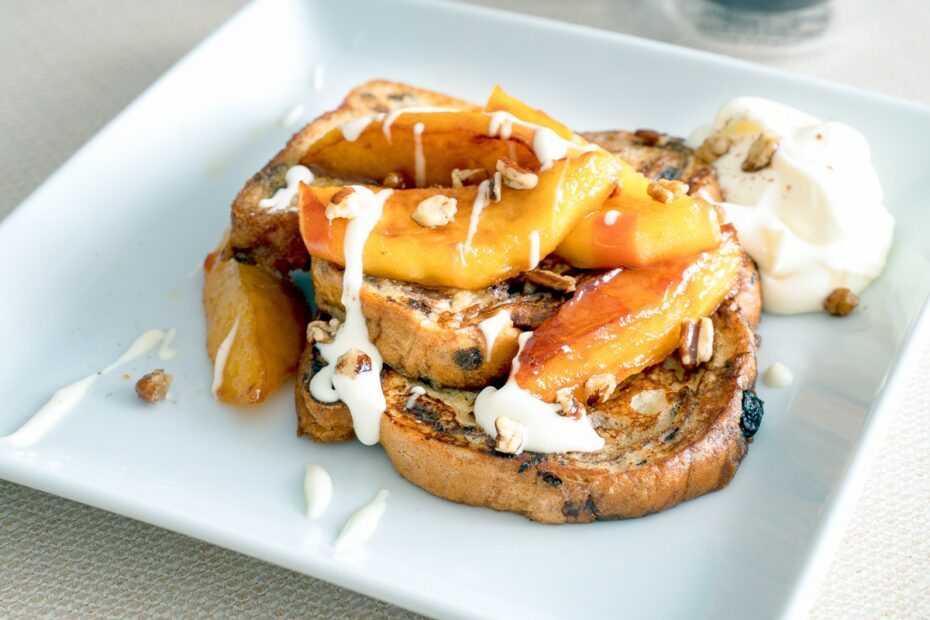 This cinnamon raisin French toast will have you questioning if you really need to eat a cinnamon roll ever again! Glazed with whipped cream cheese, cinnamon raisin bread is dipped in custard, fried, and then covered with apples that have been caramelized in brandy.

The toasting cinnamon raisin bread and the caramelizing apples will fill your home with the most intoxicating aromas. You’ll want to make this dish over and over again.

A warming and deliciously sweet meal, this French toast is perfect for a cold winter morning. Imagine tucking into a few slices of cinnamon raisin French toast with a cup of hot apple cider. Or, consider a strong espresso, tea, or cup of coffee. Because of its robust flavors, it stands up well to these flavorful drinks.

However you decide to serve it, cinnamon raisin French toast takes the best of French toast and cinnamon rolls, adds caramelized apples, and creates an aromatic and warmly spiced plate for your next brunch. 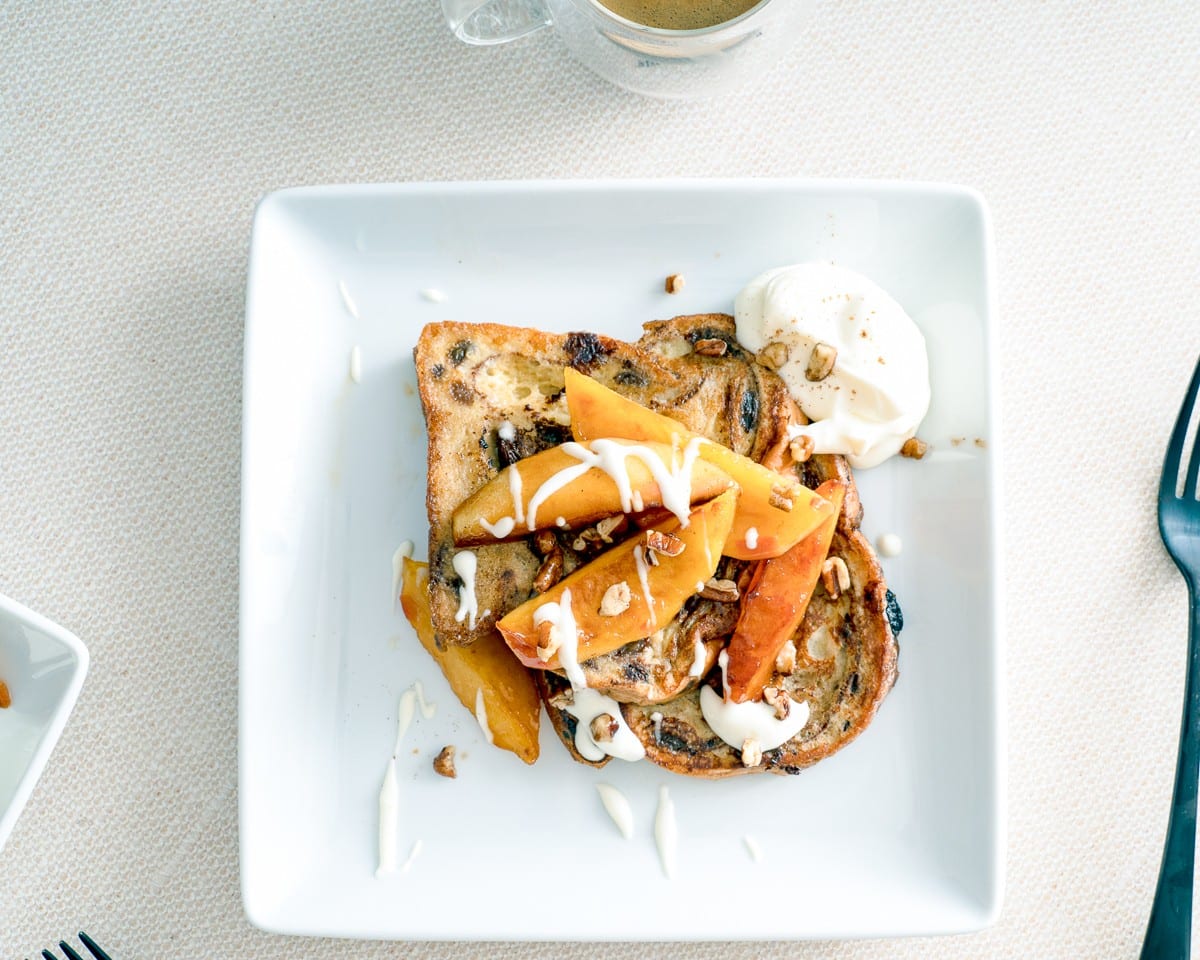 Cinnamon raisin French toast is a great way to use up extra apples during the winter and fall season. The recipe’s cinnamon spices are cooled by the whipped cream cheese.

Just use this whipped cream cheese sparingly. Cream cheese can easily overwhelm the dish, and what we really want to taste are those gorgeous, buttery apples and rich, sweet bread.

What You Need to Make Cinnamon Raisin French Toast

Many of the basic ingredients in this recipe should be in your pantry: eggs, milk, butter, and sugar. But you will need a few special ingredients.

Most importantly, you need cinnamon raisin bread. I used a packaged brand, which is pre-sliced very thin. Keep this in mind when you choose your bread and soaking times. I suggest you only dip your bread because I had bread slices disintegrate when trying to soak the bread for more than a few minutes.

If you are using a more rustic or even homemade cinnamon raisin bread, count on soaking the bread for longer. If you are raisin-averse, you can also use cinnamon bread, but know that those dried fruits are adding some sweetness and texture to the dish, and you might want to add a tablespoon of sugar to your custard to compensate.

I like to use apple brandy for a nice pop of flavor, but any brandy will do. If you want to skip the alcohol altogether, try adding a squeeze of lemon juice to the apples while they are cooking. This will add brightness to the apples.

This recipe requires a few kitchen tools: a knife, a peeler, a cutting board, 3 bowls, a whisk, a shallow baking dish, and at least one non-stick frying pan. If you only have one frying pan you can make the apples first and then reuse the same pan, but if you have two, make the apples while the toasts are frying to save a bit of time. 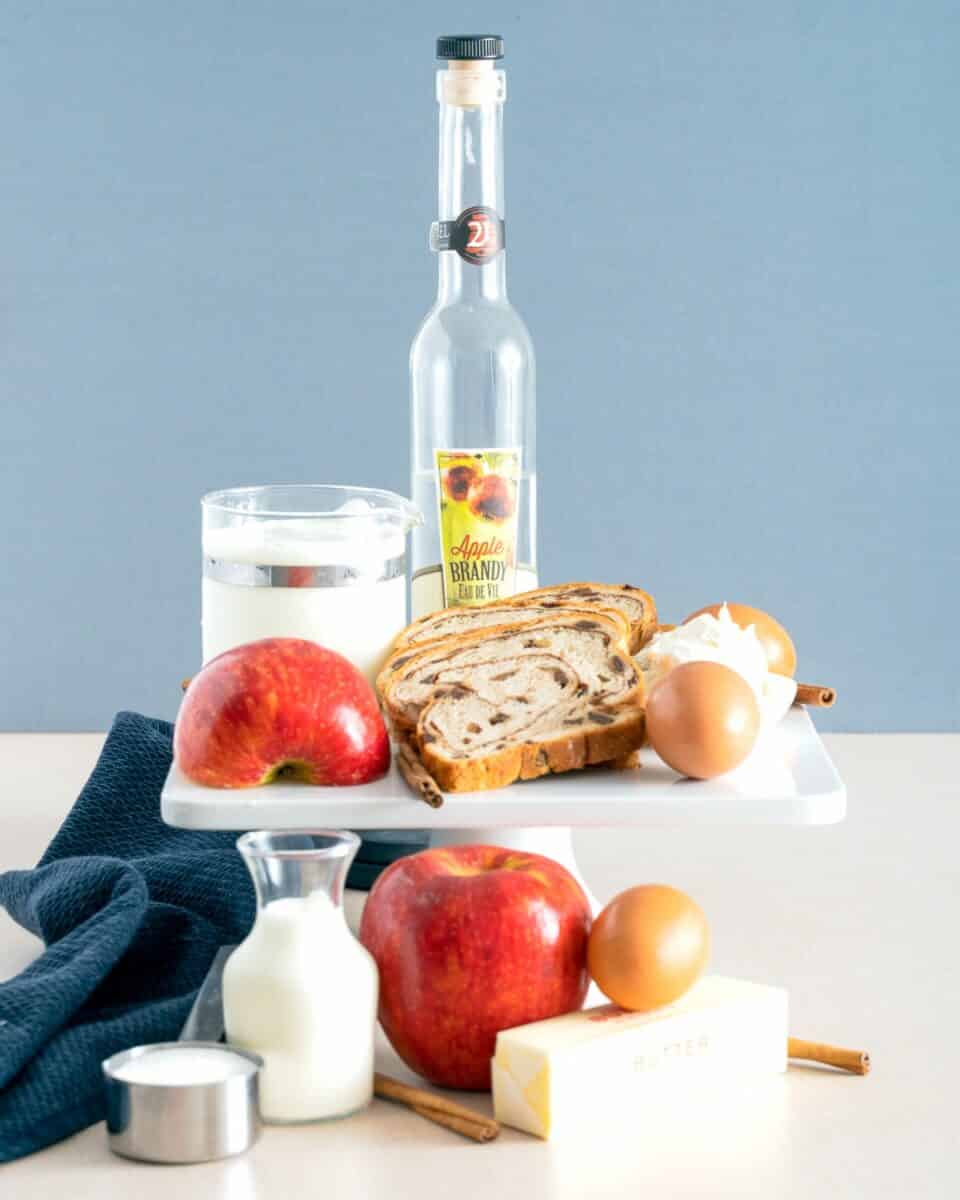 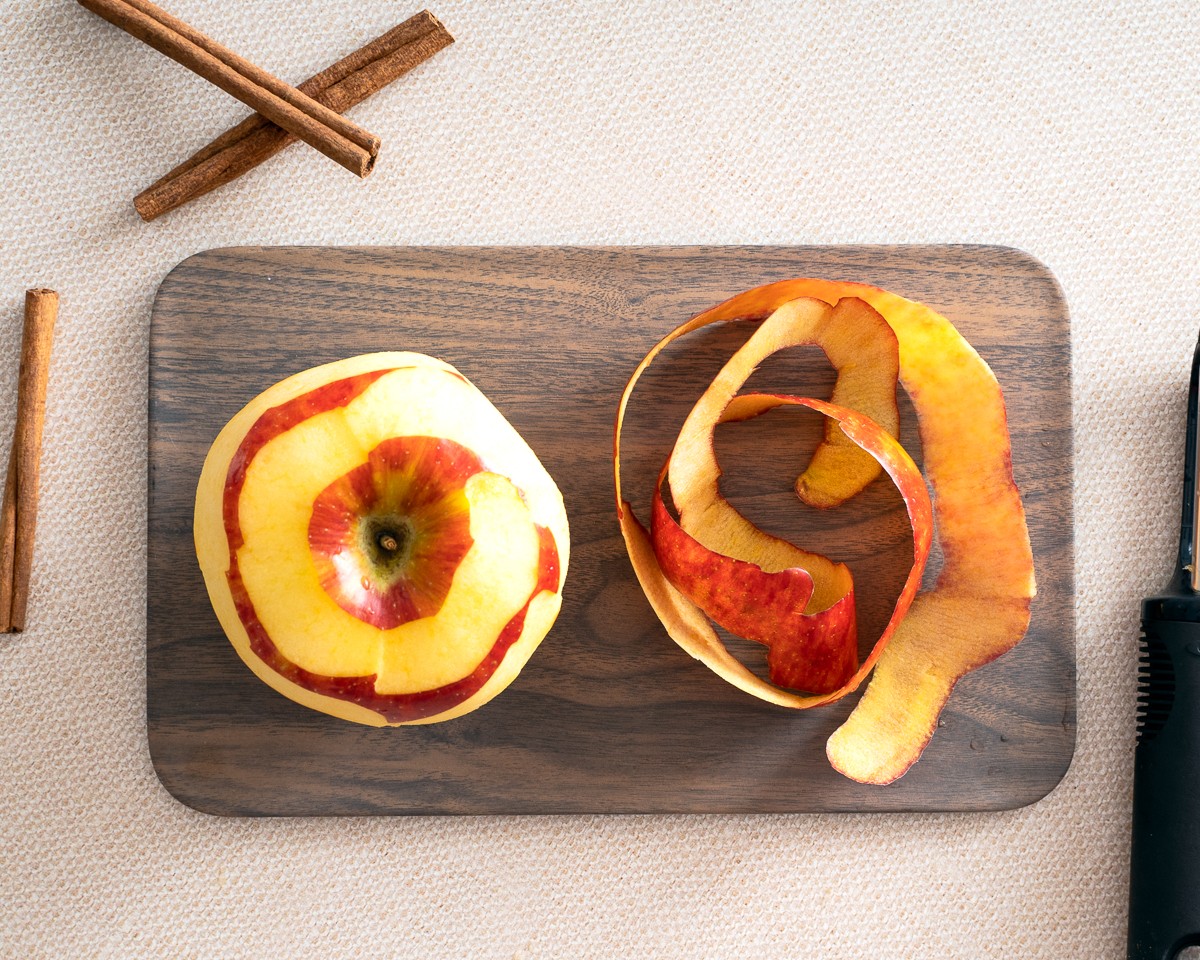 Make the apples: Peel and core the apples, then slice them into 1/4 inch wedges and toss with sugar, brandy, and salt.

Heat a non-stick frying pan on medium heat with butter. Add the apples and sauté for 10 minutes, allowing the juices to simmer. Stir occasionally to ensure the apples get evenly browned.

When the apples are soft, but not falling apart, remove them from the heat and allow them to cool. 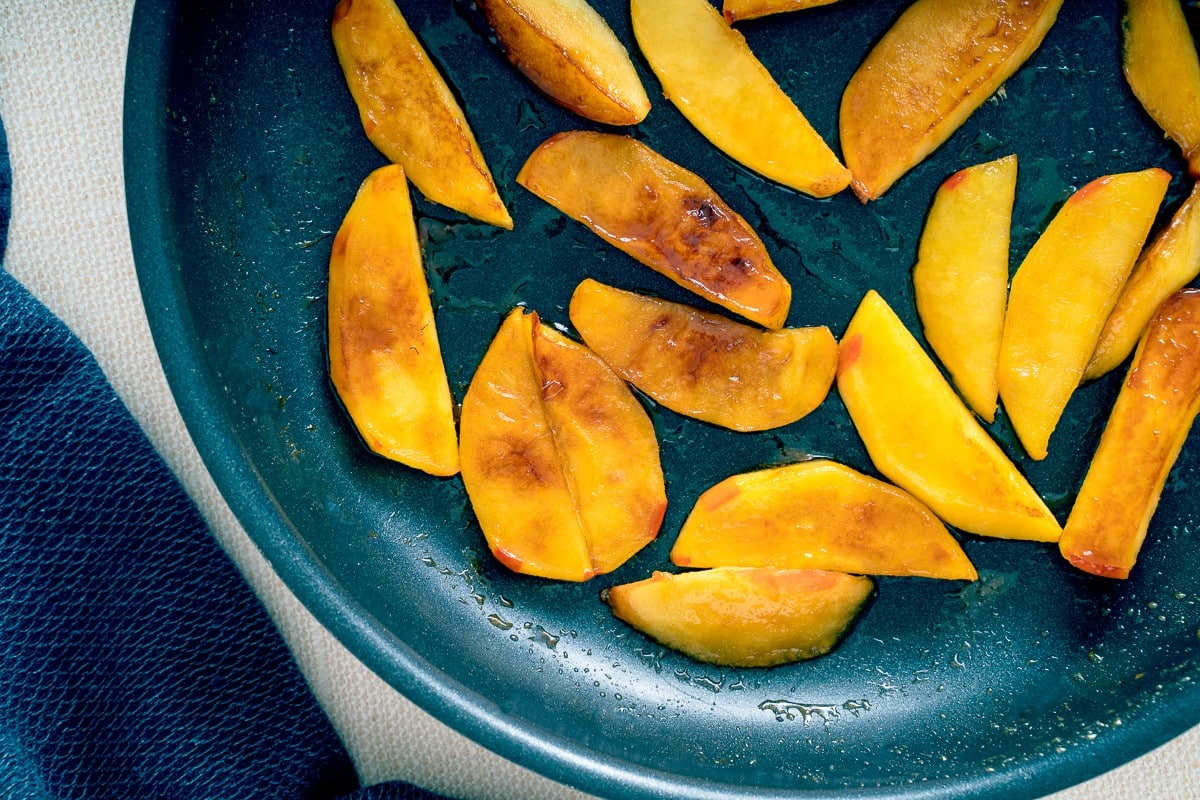 Make the whipped cream cheese: Put the cream cheese and heavy cream in a bowl and whip until smooth, 1-2 minutes. It should be slightly looser than frosting. If you prefer a sweeter topping, add a tablespoon of powdered sugar. 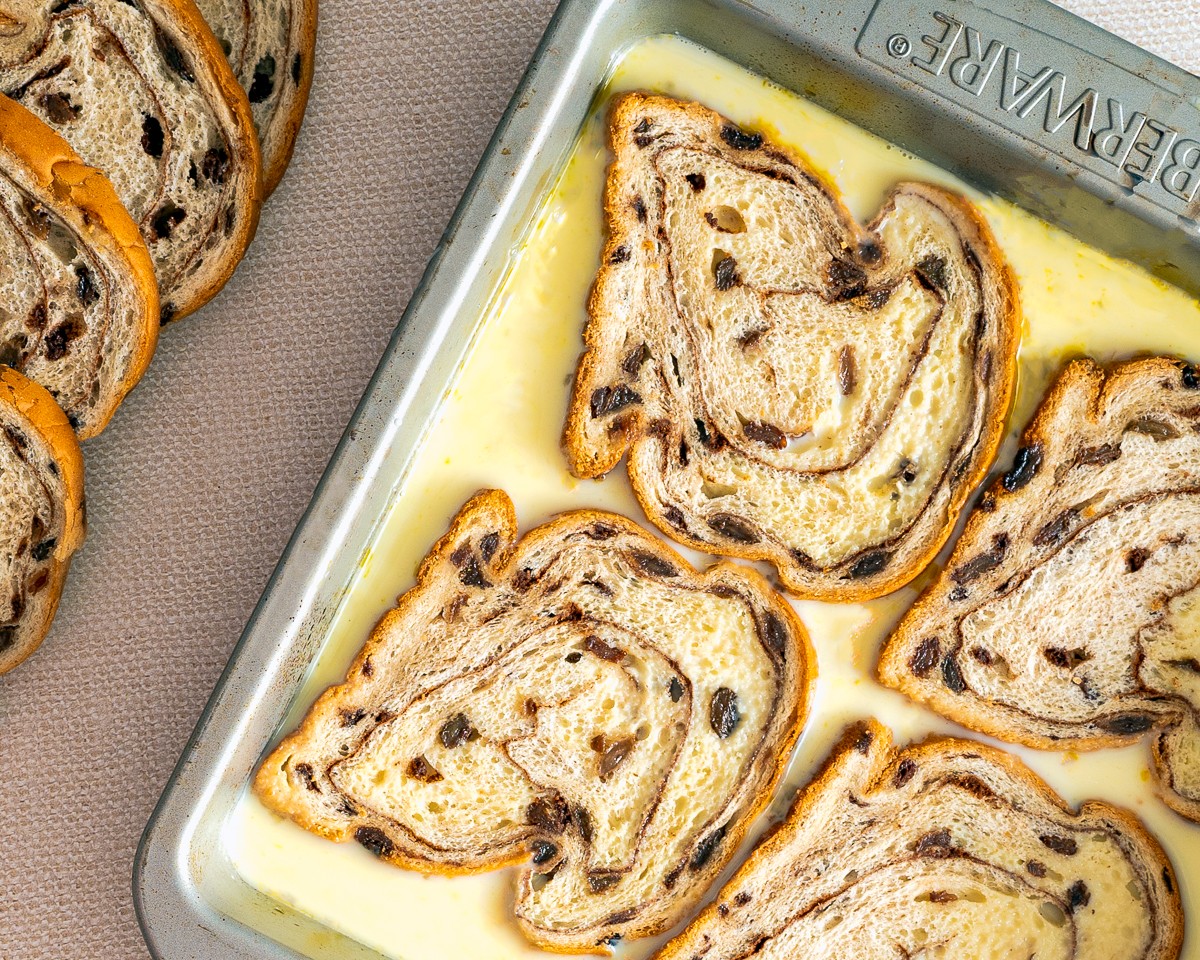 Make the French toast: Place eggs, milk, and salt in a bowl and whisk until smooth. Pour into a shallow baking dish.

Heat butter in a non-stick skillet on medium heat. Dip slices of bread in the custard (do not soak) and then fry for 3-4 minutes per side.

Assemble the Cinnamon Raisin French Toast: Place two slices of French toast on a plate and top with apples, whipped cream cheese, and a sprinkle of pecans (optional). 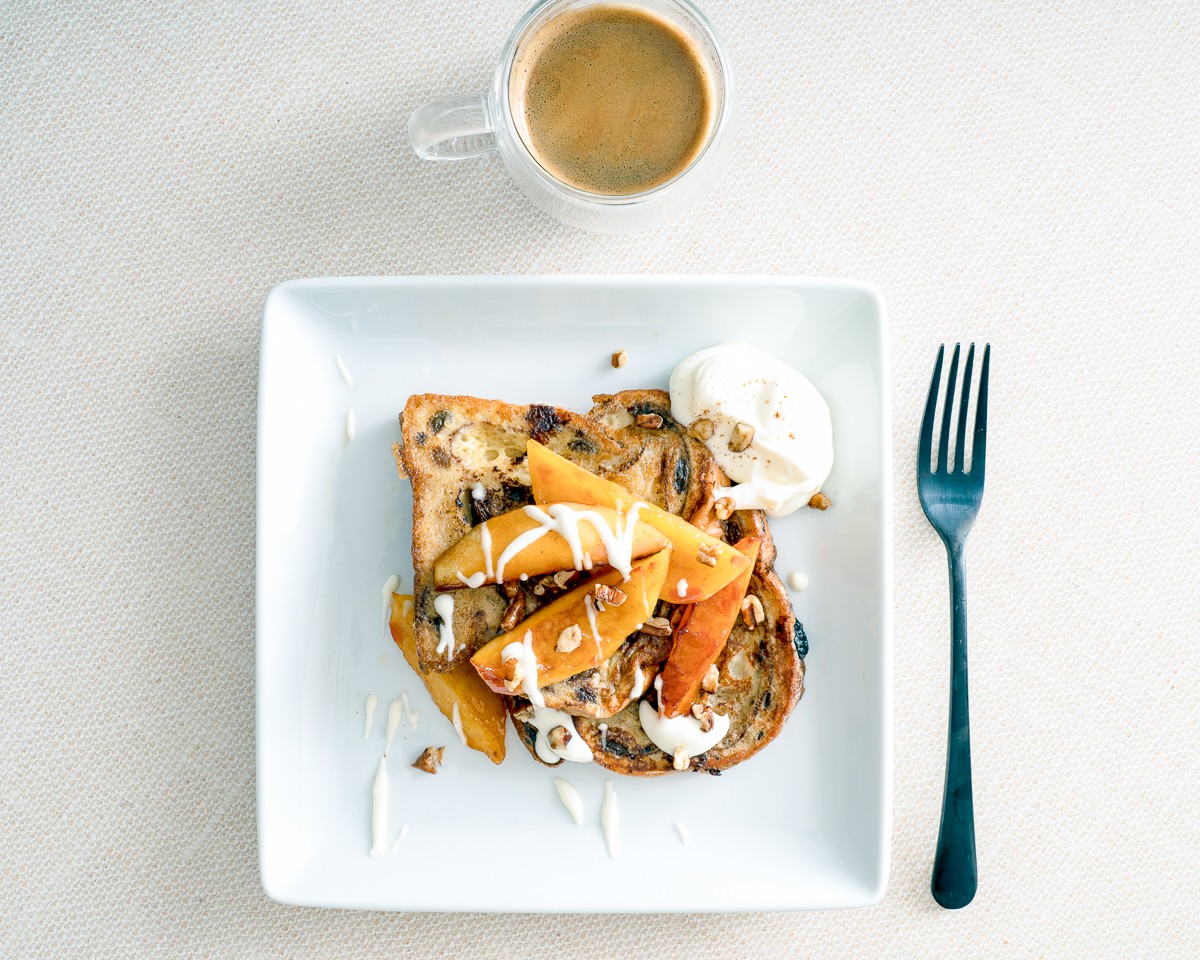 What can I make ahead of time?

You can make many parts of this dish ahead of time. The apples can be prepared the day before and reheated in a skillet, as can the French toast.

What kind of apple should I use?

For this dish, you want to use a firm, sweet apple. We don’t want to introduce extreme tartness, like what you might find in a Granny Smith, but I like the bright juiciness of a Honeycrisp or a Pink Lady. You can also try Gala or Fuji for sweeter apples.

What can I do with leftover apples?

I love to make caramelized apples in the fall and winter months. They are so warm and comforting. Leftover apples are delicious on their own, with a little granola crumble, or on top of vanilla ice cream.

What can I do to make this spicier?

We use the cinnamon that is in the cinnamon bread as the primary source of warm spice flavor. This keeps the flavors clean tasting, allowing you to taste each component of the dish.

But your bread might not be spiced enough or you might want a lot more cinnamon and deep flavors. If you start adding spices, start slowly. Start by swapping the granulated sugar for brown sugar in the apples. Then try adding a ½ tsp of cinnamon to your apples.

Last, add a ½ tsp of cinnamon to your whipped cream cheese. For something a little brighter but that still complements these spices, try garnishing with grated nutmeg. 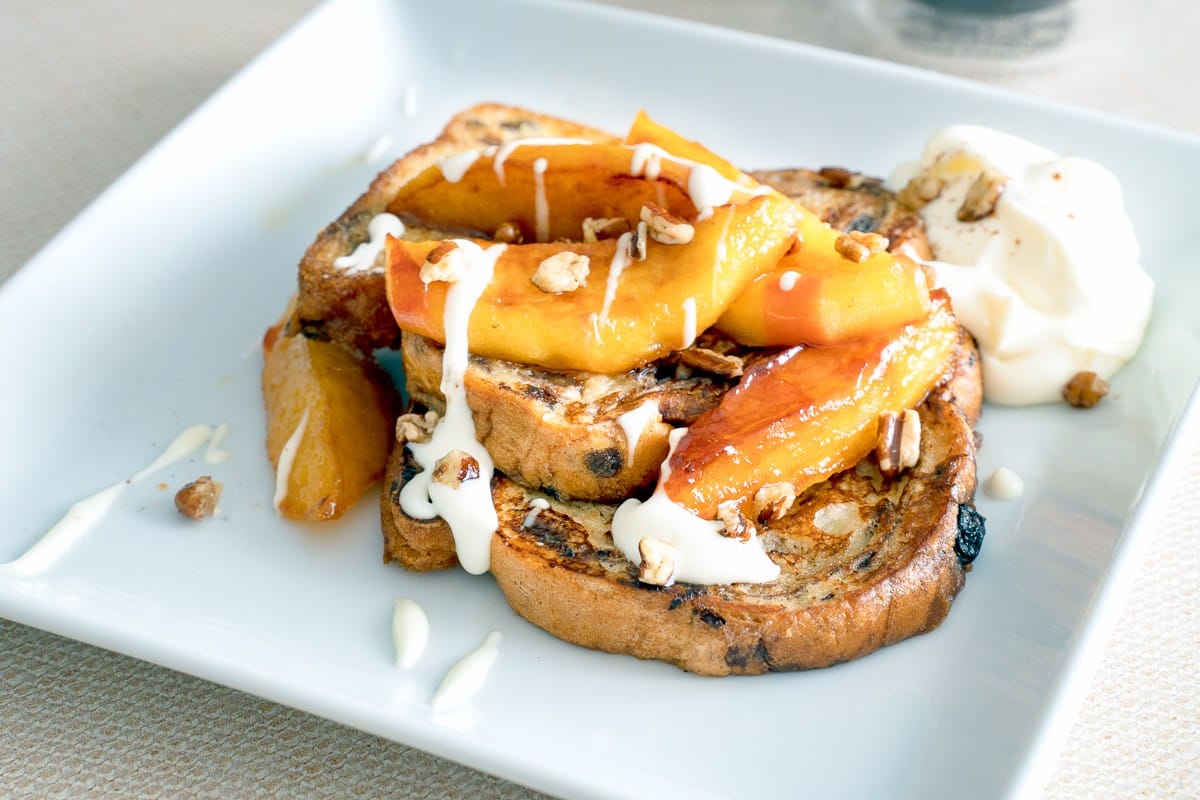 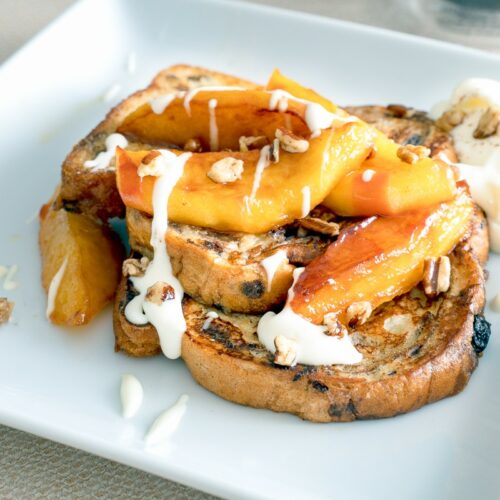 Arielle Hess
Cinnamon raisin French toast blends the flavors of a cinnamon roll with the textures of French toast to produce a sweet, comforting dish. Cinnamon raisin bread is dipped in a light egg custard and topped with apples that have been caramelized in apple brandy, and dollops of whipped cream cheese. Perfect to warm your soul on a crisp, cold morning, this dish will be a hit at your next brunch.
Print Recipe Pin Recipe
Prep Time 15 mins
Cook Time 25 mins
Total Time 40 mins
Course Breakfast
Servings 4 (2 slices - one serving)
Calories 527 kcal

Here are a few other recipes you might enjoy! 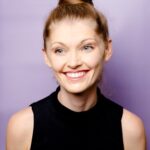 Arielle is a food and drink photographer based in Washington, D.C. She was previously a social science researcher before she fell in love with photography.

Like this recipe? Leave your comments below! Cancel reply

We use cookies on our website to give you the most relevant experience by remembering your preferences and repeat visits. By clicking “Accept All”, you consent to the use of ALL the cookies. However, you may visit "Cookie Settings" to provide a controlled consent.
Cookie SettingsAccept All
Manage consent

This website uses cookies to improve your experience while you navigate through the website. Out of these, the cookies that are categorized as necessary are stored on your browser as they are essential for the working of basic functionalities of the website. We also use third-party cookies that help us analyze and understand how you use this website. These cookies will be stored in your browser only with your consent. You also have the option to opt-out of these cookies. But opting out of some of these cookies may affect your browsing experience.
Necessary Always Enabled
Necessary cookies are absolutely essential for the website to function properly. These cookies ensure basic functionalities and security features of the website, anonymously.
Functional
Functional cookies help to perform certain functionalities like sharing the content of the website on social media platforms, collect feedbacks, and other third-party features.
Performance
Performance cookies are used to understand and analyze the key performance indexes of the website which helps in delivering a better user experience for the visitors.
Analytics
Analytical cookies are used to understand how visitors interact with the website. These cookies help provide information on metrics the number of visitors, bounce rate, traffic source, etc.
Advertisement
Advertisement cookies are used to provide visitors with relevant ads and marketing campaigns. These cookies track visitors across websites and collect information to provide customized ads.
Others
Other uncategorized cookies are those that are being analyzed and have not been classified into a category as yet.
SAVE & ACCEPT